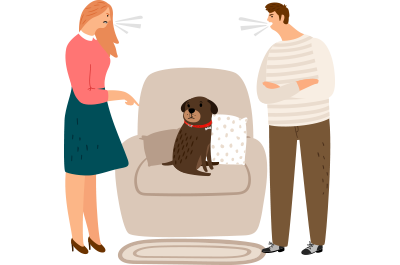 Forget the House…Who gets the Dog?!

Separation and divorce will introduce you to a whole new world of rules and regulations – there are laws dealing with the separation of property and assets, and stringent guidelines to follow when working out custody agreements.

While this can be overwhelming at first, it is also genuinely helpful – because in a stressful and emotional time like this, it can be quite comforting to know that at the very least there are rules to follow and forms to fill in to make sure the settlement is as fair as possible.

In regards to possessions and shared children, the law is reasonably straightforward; but what about shared pets? How do you determine who gets to keep the dog, the cat, the snakes…any pet acquired during the relationship?

If you can, work it out privately.

Even though you might love your pet as you would love a child, all pets are classified as property when it comes to the law.

Regular family pets – cats, dogs, guinea pigs etc – are not considered valuable assets and the courts will generally frown up any disputes concerning such pets. There are exceptions, of course. If an animal has a genuine monetary value, like a race horse or a pedigree dog sought after by breeders, the courts will take this into consideration and include such an animal in the property settlement. The same goes for animals that generate a substantial income, such as cattle.

As a general rule, the courts encourage separating partners to work out care arrangements for their pets without getting lawyers involved; so it might be worth having a sit down (or at the very least a civil phone conversation) and try to find a solution.

If you can’t – here are your options:

If you absolutely cannot agree on who will keep the dog – and are unwilling or unable to share doggy custody – you can get the courts involved. Remember, this is not a matter of custody, it’s a matter of property settlement.

If you apply for a property settlement, you are going to have to participate in Family Dispute Resolution (FDR); it’s basically mediation that will hopefully lead to the matter being settled out of court.

However, if there is simply no working it out, the matter will go to family court as part of your property settlement, where some of these points may be considered:

If your pet becomes part of the property settlement process, it is up to the court what happens next – that means the court can theoretically order the pet to be sold so you can split the proceeds, the same way it might with a house or a car.

If you have shared human children, the court might decide that the pet should stay with the children, meaning that it will travel with them between the parents’ houses depending on custody arrangement; or alternatively order the dog to stay with the parent who sees the children less to decrease their stress and solitude.

Keep in mind, once the court has signed orders, it is very hard to appeal the decision, so it’s often in everyone’s best interests to settle pet matters privately.